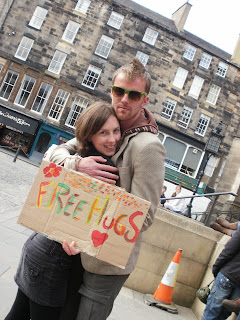 Last week, I was in Edinburgh for a Couchsurfing festival, Edinburgh Rocks! 2010. Among many other events, my favourite one was the "Free Hugs" one. I find the concept of "Free Hugs" such an awsome gesture to restore people's faith in humanity and of spreading goodwill and positivism!

I was standing in that square for approximately two hours and I can say that the whole square was literally jetting out positive energy just because there were a bunch of us standing with smiles on our face, trying to make other people's day just a little bit better. During those two hours, at least 4 people asked me what was the campaign about. But, the sad part is that when we told them, it's just a Free Hugs event (I refuse to call it a campaign, however innocent and pure it's meaning may be!) to spread love, they refused to believe us! They were convinced that it's a product for which we are advertising or that we'll ask them for some donation/ money afterwards or something. People today are so governed by materialism that when somebody does something out of pure emotions, we doubt it of being genuine! Most of the people passed us by. But, at least, when they looked at us, looking at them expectantly, hoping to hug them to make them feel better, they smiled. And, that was our reward: the smile that showed that they felt better, that they felt happier. And that smile meant that we had achieved what we wanted to! It's like a chain - if they are happy, they will make someone else happy, who will make someone else happy and so on and so forth. If this chain is at work everyday, in every city, the world would be a much happier place!

There were others, who refused to even acknowledge our presence in the area.... They just walked us past, not even smiling. I saw one woman sniffling and smoking and a few other guys, who had ugly scowls on their faces. And my heart went out to them!! These were the people, who actually, really needed the hugs. One might argue that they actually only needed some space. But, it is a scientifically proven fact that a human touch, a hug or a kiss works much better than any other kind of medicine to help stress and depression. If the world had a bit more compassion and patience with humanity, it can work wonders for itself! The Free Hugs was just a medium for spreading some of this. I hope I get to do it more often in the future and people in general do it more often as well!! :)
Posted by Carpe Diem! at 10:20 AM