The glass is half full!!

When I was walking down home from my friend's place yesterday, it was raining here. Well, this IS England and it rains here quite often and at anytime of the day!! It might be sunny one minute and start raining the next! There have been times in January when there has been sun shining brightly at 10:00 am and then, it was snowing at 11:00 am!! So, the weather is unpredictable and there is not much to say about it. 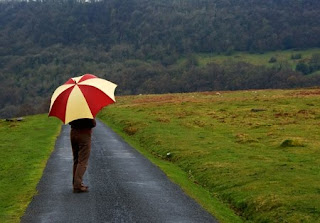 This used to be one of the things that used to piss me off so much initially! When I had come here, it had just started to get dark earlier and in general, it was autumn and therefore, things were beginning to get colder. It used to depress me so much. And, it just kept getting worse! The sun started setting at 3:30 pm at one point of time and it was so difficult to work without the daylight, with it being so cold and all! However, I digress. What I'm trying to say is that I hate the rain and the wet, especially here, where it's cold. 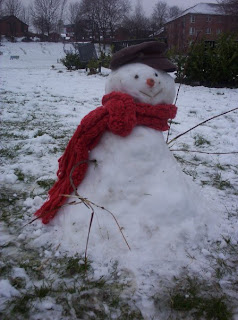 But last night, when I was coming back, I did not feel any of the negativeness I used to feel earlier. It was raining and I was cold and wet. But all I thought was that it could be worse. Now is spring, days are longer and relatively warmer. It could have been much worse. WOULD have been much worse, in winter. And I realised, that this is the positiveness one needs to get on with life, to really LIVE it! The philosophy of "The glass is always half full rather than half empty" will get you through with most of your bad patches in life. So, I have decided that if I have to spend more winters here, I can think of how I'm not on any of the poles, where I'd not see the sun for 6 whole months or how I'm enjoying a white Christmas and there is so much jollity and festivity around me instead of thinking of the cold and depression. Instead of thinking how much it rains, I'll take pleasure in simple things, like reading a book in the park whenever I get the chance or thinking how it wouldn't be so beautiful, green and flowers blooming everywhere if it didn't rain as much as it does! 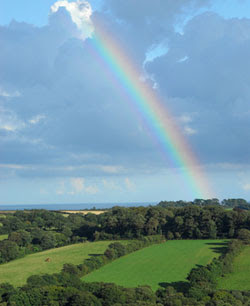 After all, a rainbow appears ONLY when there is both, sun AND rain! :)
Posted by Carpe Diem! at 2:22 AM