First of all, Wheeeeeeeeeeeeeeeeeee!!!! India won the World Cup!!! :D Though I am about 75% convinced that it was a fixed match, I will still be happy and celebrate India's victory!

But what I am happier and more kicked about, is the victory celebrations that I witnessed in the small suburb of Mumbai that I live in.People out on the streets, on foot, on bikes, in cars, with dhols, loud music systems, flags, the world cup look-alikes, screaming, cheering, dancing, celebrating, with anyone and everyone - friends and strangers alike. Truly, cricket is a religion in India - one that unites people instead of dividing them. ♥ I have never loved being an Indian more than today! :) 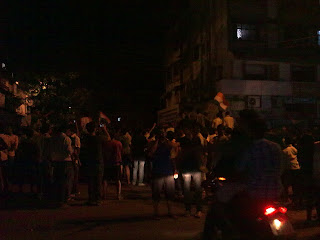 Sorry for the poor quality pictures but father and I just went out for a walk to see things, like a tourist and we didn't realise that taking the camera would be totally worth it. So, phone camera it was. 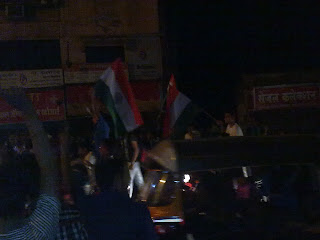 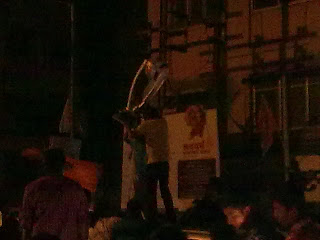 I don't care much about cricket and most definitely, have a few ideological issues with it as well. But, with this atmosphere that it has managed to create, I not just forgive it, I accept it open and whole heartedly. :) My father used a Gujarati word for it: "Swayambhu" meaning something that comes all by itself, from your heart and in a mob, not incited by any speech or anything.
Posted by Carpe Diem! at 1:07 PM

Email ThisBlogThis!Share to TwitterShare to FacebookShare to Pinterest
Labels: cricket fever, On why I love India