Rowling  creates a whole alternate system of life! Ministry, Judiciary, Laws, Banks, Transport, Flora and Fauna, History, Geography, even things as minute as playing/ collecting cards and flavours of sweets. I think it's just sheer genius! The way how every event can later be traced into something meaningful (maybe not so much in the 7th Book but in the others) and even things in the third book can later be chained onto something perfectly sensible in the 6th or the 7th book is great. It must have required so many efforts and such hardwork and yet she manages to make it look like it's easy, this story-telling business - it just goes to show the talent of any writer.So, yes. Favourite Series: The Harry Potter Series. :D 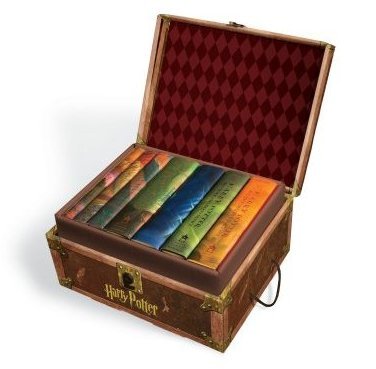 That's a picture of the box set of Collector's Edition of the Harry Potter series which I intend to buy when I can. As you can see, I'm clearly a big fan. :D :P I seriously love this series and I think people who haven't read it are missing out on something awesome (Go read it!) and people who don't like it, you can't recognize amazingness when you see it! (Read it again. :P)
Posted by Carpe Diem! at 11:42 AM