About time I post about my Irish adventures, no?

Well, considering we didn't have any real adventures, I guess this would be another gushing-about-beautiful-places and photo-diaries kind of entry. I'll just let the pictures speak about the beauty of Northern Ireland. 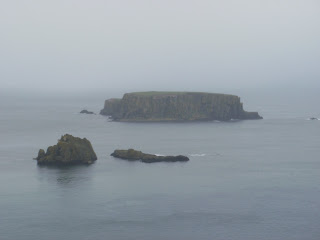 S and I mostly drove along the East-coast of the Northern Ireland: along the "Coastal Route" and trust me, it is the most beautiful and picturesque place I've been to in all my trips to various places in the UK. No doubt I loved the English, Scottish and Welsh countryside, the ancient and haunted-looking English abbeys and the randomness of English cities. But Northern Ireland was different.  The Irish country had a different look to it, more rugged and edgy. Like in the picture above, all along, you can see such tiny rock Isles dotting the Irish sea. The fields looked almost the same as the fields on this island. But still if anyone ever put two pictures in front of me, I think I'd recognise Irish fields apart from the others. They have a different, more untouched, wild, unkempt look to them than English and Welsh fields. 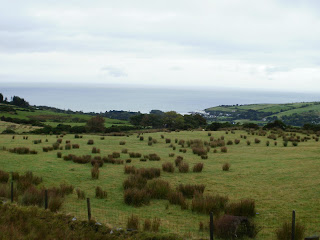 We saw a few castles as well. Only, the Irish are funny that way. :P Some of the "castles" were nothing more than 3 pillars on a cliff. One Dunsverick Castle was like that. But it was a beautiful shot, with the grey, gloomy day, the sea and the sky just blending into one mass of grey, the rock isle and the cliff: very atmospheric! :P 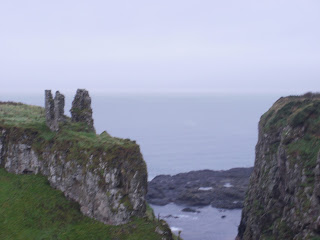 I thought two places were the most beautiful though: The Giant's Causeway in the north and Newcastle (yes, there is a Newcastle in Ireland as well! :P) about 45 minutes south-east of Belfast. The Giant's Causeway has got some of the most beautiful rocks I've ever seen. And they were all hexagon shaped and formed patterns. It is a short walk from the parking lot to the Giant's Causeway and there, we came across a bare hillock, which, curiously, had both red and black soil and you could make out a distinct border where the two different tectonic wonders met. Amazing how rocks that are not Tifanny square cut can be so fascinating. (Sorry for the cheesy, cheesy attempt at really sad humour. I've been reading way too much chick-lit for my proposal. :P) Anyhoo, several pictures for the Giant's Causeway: 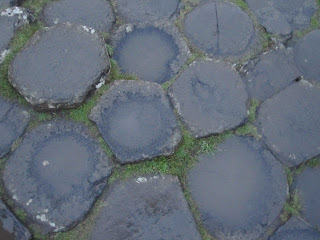 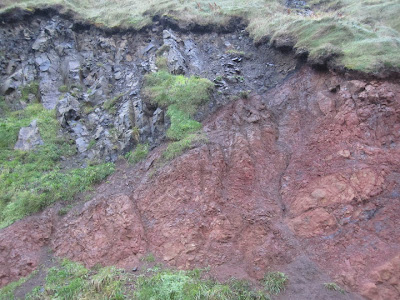 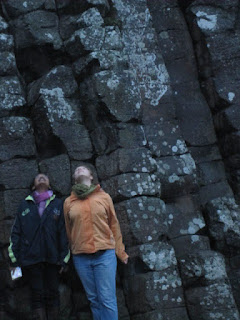 This last one is of a pile of rocks, barely as high as a one-storey building. But I saw it in a brochure before actually seeing it and these people had posed like that. So, I expected it to be never-ending coz that's probably the illusion they wanted to give. S and I gave our best shots and even though it's no brochure material, I think we did pretty well, no? :P

And the second beautiful place I talked about is Newcastle, near the Mountains of Mourne. There are several hiking routes for the hikers up there when the weather's nice. But we were comfortable and cosy in our car. And I think I've had enough "hiking" to last me for quite a while. :P Anyhow, Newcastle is a quaint, little  beach town but you can also see beautiful, beautiful views of the Mountains of Mourne from the beach. We found a "Mourne Coastal Path" and came across a secluded place on the rocks next to the sea with a tiny stream flowing into the sea. It was so quiet, calming and soothing, we both spent about half an hour, just sitting there, lost with both our individual thoughts. I sat facing the sea, which reminds me of my home and S sat facing the other side, which was essentially, a stream and woods and reminds her of her home. (She grew up on a farm in upstate New York.) And we picked and ate countless blackberries. Sigh. What bliss that hour was. Lots of pictures from Newcastle and Mountains of Mourne. :P 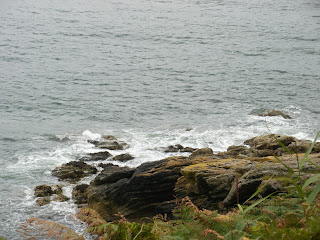 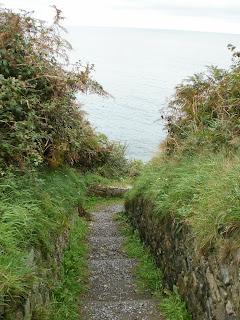 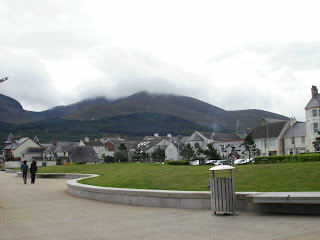 Pretty, no? The second one is the Mourne Coastal Path and this last one is of the Mountains of Mourne as seen from the Newcastle beach. So, basically, I saw everything short of a nice little Irish holiday romance. (Damn.) And I think everyone should visit Northern Ireland at least once if they are in the UK! I can go on and on with pretty pictures if you are not yet convinced. But I swear, I'll just give you my last one: the street lights at Newcastle Beach, which I found very interesting and which is actually a good piece of photography. 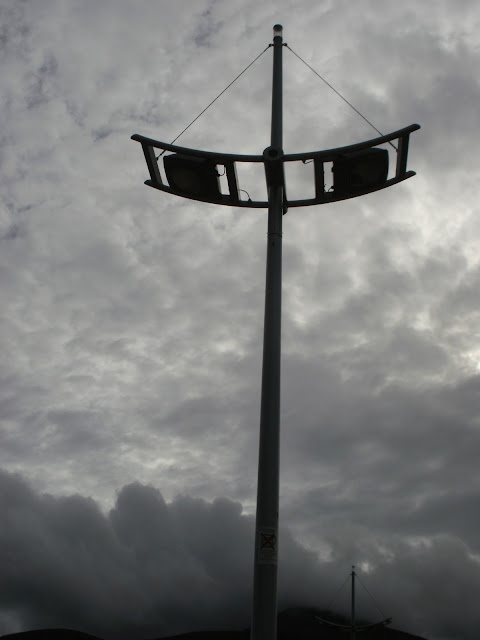