I watched the play Draupadi directed by Tina Johnson and Shivani Pasrich at NCPA on Sunday. I must say, after all that I had heard about her, I did not expect something so mediocre from Tina Johnson.

Draupadi, for those who are not familiar with the Hindu mythology, is the wife of the five Pandavas from the epic, Mahabharata. The Kauravas (the evil cousins of the Pandavas) challenged Yudhistir, the eldest Pandava, to a game of dice. Yudhistir lost everything he owned to the Kauravas including his brothers and finally their wife, Draupadi. She was humiliated in front of a whole court full of elders. Lord Krishna came to her rescue and even when Duryodhana, the eldest Kaurava, was pulling her sari, it never ended. Finally, he gave up and she couldn't be completely de-robed. The Pandavas were then sent into exile for 13 years. However, Draupadi, it is said, sought revenge for her humiliation for all of those 13 years. And when they returned, this episode was used as an excuse for the battle of Kurukshetra between the two sets of cousins. 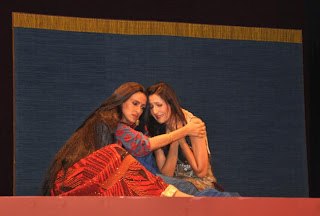 The play Draupadi, is about a modern day woman, Maaya (Chaaru Shankar), who faces the same challenges as Draupadi did in her times. Having faced severe humiliation at the hands of her own family, she has to make a choice - whether she wants revenge or should she forgive? Draupadi (Shivani Pasrich) is still on the earth, her soul, having been denied from the heaven because of her pride and vanity. She sees Maaya trying to commit suicide and stops her. She offers to give Maaya advice if she would perform a special pooja for the redemption of Draupadi's soul. Maaya ignores Draupadi and seeks revenge. Finally, they both realise that revenge brings no change and nothing can take away the pain of humiliation. It's best to forgive and forget. It is only through forgiveness that you can get redemption.

Thus the premise of the play is that you must forgive and forget. However, the reason the play did not work for me was because they forget what they are asking to forgive. How can a woman think of forgiving one of the most humiliating, most invasive and most painful act committed by a man against her? Something that makes the woman feel impure for no fault of hers? Thus, the very premise of the play is based on shaky grounds.

As far as the performances go, Dilip Shankar is excellent in his role as Krishna. He manages to capture the world-wiseness as well as the mischief of Krishna's character brilliantly. Unfortunately, none of the other characters are as well-portrayed. Kaurava (Sanjit Bedi) is not evil enough, Arjun (Arjun Fauzdar) is not man enough, Maaya is not distressed enough and Draupadi is just plain annoying in her look-at-me-I've-suffered-for-so-long-and-only-now-do-I-realise-forgiveness-is-the-key comments. I think the whole point of Draupadi's character was so that she can show off Ritu Kumar designed beautiful dresses. The only point where I liked her was when there was a mini dance sequence during Arjun and Maaya's wedding. It was beautifully choreographed by Aniruddha Das and very well-executed as well. 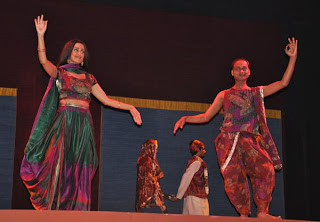 There were a few good moments in the play. For every scripture-spat dialogue, there was a genuinely nice and thought provoking dialogue and Dilip Shankar provided some much needed, intelligent comic respite. Do watch if these kind of things interest you and you have absolutely nothing to do instead. But, don't expect ingenious stuff. Feminism and mythology finally seems to be overdone now.