As children are, he is often the source of entertainment in my drab, drab life! :P
Being the youngest in the family, he is often called "baby" by everyone. Once, when he was about 6 and we had gone to Rajasthan for a holiday, he had just woken up from an afternoon nap and I said something to the effect of "My baby has woken up!" And he just started screaming, "What baby, baby, baby?! All the time baby, baby, baby! I'm not your baby, ok?!!" causing all of us to burst into peels of laughter. On the same trip, whenever he was tired, he would say, "Uncle, my tyre has gone flat." And my dad would have to "fill air in his tyre" by basically going back to the hotel/ car if we were too far away and letting him go to sleep. Once he rested properly, he would wake up and say, "Uncle, my batteries have been re-charged. Let's go somewhere!"
Recently, after I came back, my mum made pani-puris (golgappa, puchka, whatever you call it! ;)) and the mint pani was a bit spicier than it usually is. And he couldn't have it with as much relish as he would have like to. But of course, he can't say that my mum made a mistake in cooking. It's an ultimate insult to her! :P (Now that I think of it, it's awesome that he's learning that so soon, when he's only 10. I think there are some thing boys must learn from their mothers' wombs and come. And not criticizing women in something that they are good at is one of them. It's the recipe to a healthy life. :P) Anyway, since he couldn't say anything to her, he turned on my dad and screamed, "Uncle, if you want everything spicy, why don't you keep some chillies separate for yourself? Why do you make aunty put them in food for everyone? Now, no one except for you can eat this!" And boy, did we all laugh! 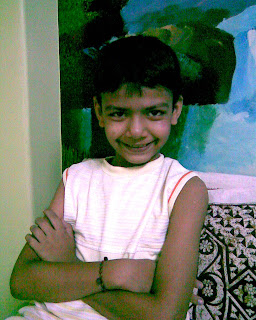 See his naughty smile? Here's what he must be up to:
Mischievous that he is, he used to always pull my leg. (Ok, you probably will too, if I tell you why but hey, I'm possessive about my things, ok?!! :P) I have a specific plate and a specific spoon that I use in my house. No one else should use it and I definitely don't use anything else. And Hoppy, knowing this, just before I sit for my meal, will grab my plate and spoon and serve himself. And I scream at him and everyone else in the vicinity. :P Then I went away to England and Hoppy was bored. So, he turned on to my father and started doing everything that he does. He would want to sit in the same chair that my dad uses and drink tea from the same cup that he uses. So much so, that once, my mum was scared that both of them will break the chair and ordered two new, exactly same chairs for both of them. :P And if he is ever staying over, as soon as he hears my dad's bike come up inside our building, he'll go and sit next to my mum in front of the TV. Since, my dad always does that when he comes back home from work!
Sigh. I don't want him to grow up at all! He seems to become taller and older and more mature everytime he comes here. And I wish he would just stay my baby and do silly, stupid things for us to re-capture our innocence for a few moments when we are with him!

This is him doing a silly dance pose for the camera at a cousin's wedding venue, after the ceremony was over. Hee.
Posted by Carpe Diem! at 10:31 PM